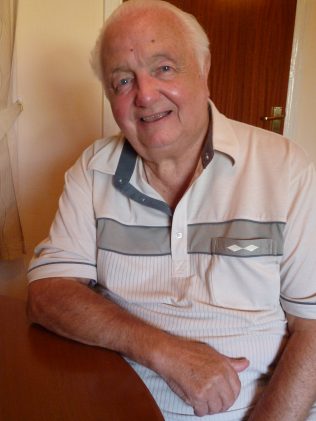 John Cook 5
John describes the weekly Friday "scrub out" day in the Craft School, "Duck boards", and the kind of practical jokes played on apprentices and by them!

John Cook 6
John recalls more of the apprentice's practical jokes, using the white dye on the marking off table amongst other things

John remembers becoming an apprentice at Fielding and Platt in 1948. He went there from The Central School along with other lads from the school, Ron Yardley, “a chap by the name of ‘Bullock'”, Neil Dickinson (who wasn’t from Central but who John remembers as being “a smart cricketer in his day”), and Tony Allen with whom John “was very friendly”.

From Central School to Craft School

With The Central School, John had visited Fielding and Platt’s Works, as well as others such as Barron’s. But he remembers the scale of the machinery at Fielding’s was really eye opening.

“To see the machinery was a sight for sore eyes because they were massive. One lathe over 20 foot long! When we were used to using small things, like a small sewing machine type thing [at Central]. Massive planers and all this kind of thing, it was really huge!”

In the second clip, he goes on to recall the machines, tools, and exercises that their Craft Instructor at Fielding’s, Bert Ravenhill, had them do.

One of the tools that they had to learn to use were micrometers, used for measuring accurately to a thousandth of an inch (or “thou” as it was known). John recalls that Bert was very good at measuring with micrometers. He would often encourage his apprentices to measure things more accurately with a favourite phrase of his: “You could measure that a bit closer if you had an eye like a stinkin’ eel!”.

“You could measure that a bit closer if you had an eye like a stinkin’ eel!” – Bert Ravenhill.

On one occasion, John remembers that Bert set them a written test with the question: “To what degree of accuracy can you file?”. He remembers that one of his fellow apprentices answered: “To a couple of ‘thou’ if I had an eye like a stinkin’ eel”. That answer went down very well with Bert.

Originally, John wanted to be a draughtsman but ended up liking the workshops better so specialised in machining and fitting.

In clip 4, he describes having to read technical drawings to do “marking off” and what marking off entailed.

One example that John gives is when a small cylinder had to have holes drilled in it. The cylinder would be brought to the marking off table in the Light Machine Shop, which was “a big, flat table about four or five foot square and a foot thick in cast iron so it wasn’t affected by heat”. On the table, the cylinder would be painted with white dye, then marked from the machine drawing to show the driller or cutter where to drill the holes.

After the machinist had made the drilling, the work would be inspected by the foreman.

Click here to listen to more of John’s memories of marking off table and Light Machine Shop in the early 1950s.

In clips 5 and 6 John describes the practical jokes that apprentices would get up to.

Every Friday would be scrub out day in the apprentice’s craft school. All the tools had to be put away and the duck boards that they stood on taken outside and scrubbed with diluted caustic soda.

John recalls that it was easy then to play a practical joke on Bert, their Craft Instructor.

“As you were playing with water with brushes, easy to flick water around the place, if Bert happened to be in the way every now and again he’d ‘accidently’ get splashed.

Click here to listen to John’s memories of the crane “slingers” in the Heavy Machine Shop.

Click here to listen to John’s memories of the Fitting Shop in the early 1950s.

Click here to listen to John memories of the Heat Treatment Room in the early 1950s.