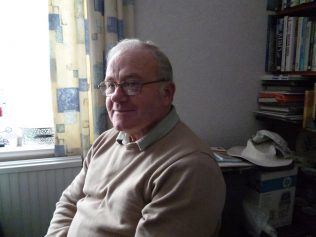 Introduction to the Company, interview, travelling to work & details of his apprenticeship
"pete_norridge_aprenticeship".

The Planning Department, social events, the canteen and the Estimating Department
"pete_norridge_planner_and_estimator".

The Trade Union, more about the fishing section and a change in direction.
"pete_norridge_union_fishing_and_a_new_career_helping_the_disabled". 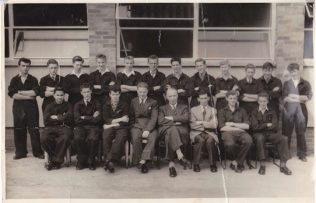 zoom
Apprentice Intake Sept 1958. Peter is second from the left, back row. 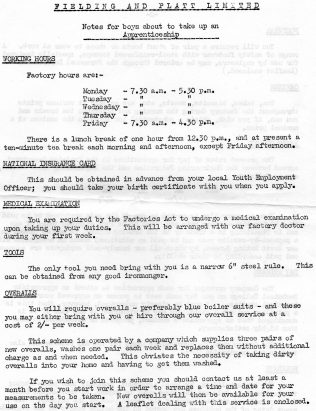 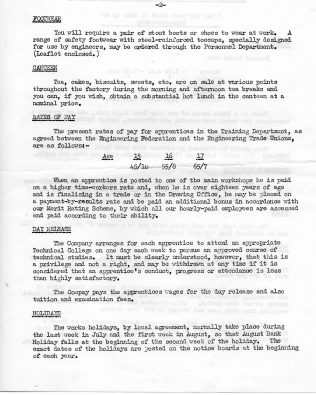 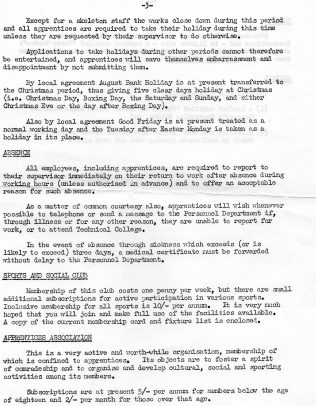 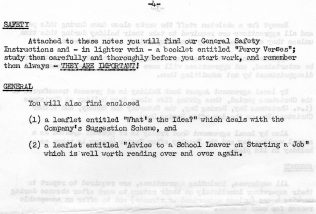 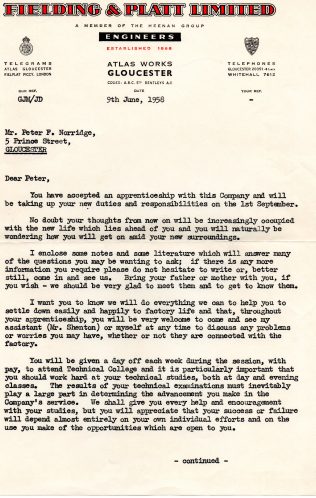 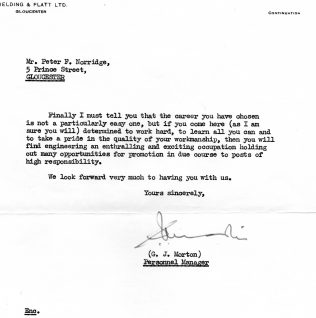 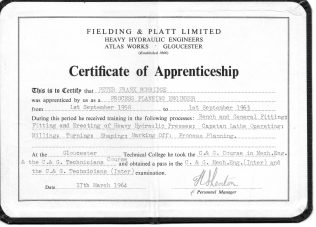 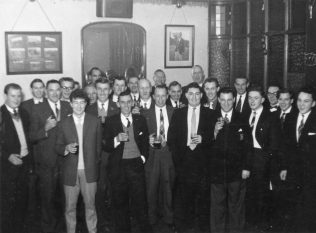 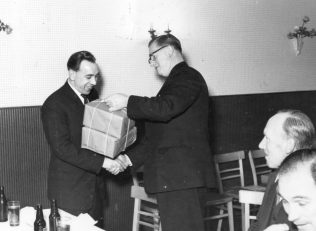 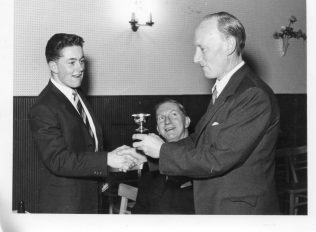 An aptitude for metalwork at school and meeting the Apprentice Supervisor at the swimming baths directed Peter to Fielding & Platt. He underwent a written entrance exam along with 30 others and an interview with the Personnel Manager. He was accepted and started work in September 1958 at the age of 16. His letter of introduction and employment details are displayed.

Peter produced a photograph of his fellow apprentices and was able to name quite a few of them. He then describes how he cycled to work from Prince Street and recalls some of the interesting places he passed along the way. After clocking in for the first time, Peter became overawed by the number of people hurrying here and there and  the noise of a factory at work. He then goes on to describe his experiences in the various parts of the factory he worked in during those apprenticeship years and many of the people he worked with. He was impressed by the help and encouragement he received along the way. Peter spent the last 12 months of his apprenticeship in the Planning Department, which, at that time, was headed by Danny Wakefield.

Peter gives a detailed explanation of the duties of a planning engineer and then goes on to mention attending Technical College and the subjects he studied. For a means of relaxing during such a busy working life, Peter joined the Fielding Angling Club. He recalls fishing competitions at various venues and how that enabled him to make more friends. He fondly remembers Mrs Jones, the Canteen Manageress and the wonderful cheese scones provided from the trolleys at break times. National Service had finished by the time Peter’s apprenticeship ended so he stayed on working in the Planning Office. Then Peter successfully applied for a job in the Estimating Department which had become available on the retirement of Bert Sutton. By that time he had been given his Certificate of Apprenticeship.

‘This entailed a move from the works to the main office block and I had to wear a collar and tie’ Peter explained.

Peter describes meeting up again with old friends who had also moved from the Planning Department and then his duties in his new department. He didn’t attend any specific training courses, it was a matter of learning from those around him. The same applied on the advent of Metrication.

Peter represented his Department on the Trade Union Committee on discussions covering such subjects as wages and pensions. He recalls this committee being severely reprimanded for returning late from a meeting in Bristol, the management team attending the same meeting having returned much earlier! Peter’s love of fishing continued. He recalls some amusing incidents which took place and recalls some of the people featured in the photographs. He also  passed on his experience, enthusiasm and assistance to enable disabled persons to fish. Salaries at the Company were certainly not high but Peter found a greater reward came from the experience of working in such a large and prestigious heavy Engineering Company as Fielding and Platt.

His fondest memories were of the camararderie and friendship he encountered. He remarked:-

‘No one let you down and no one went wanting, that is something you cannot buy’.

Peter left the Company in 1985 to take up the position of Instructor in an Engineering Workshop set up by the County Council for the training of disabled persons.

If you remember Peter or any of the people mentioned, then please share those memories by clicking on the words Add a comment about this page below.

Click on the hyperlink to find the names of the other apprentices     who started with Peter.