From Apprentice in 1949 to Chief Inspector 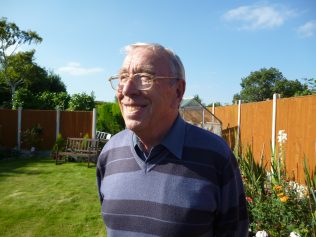 Ron's Memories of his apprenticeship
Memories of The Apprentice Training School , subsequent training and a tragic incident

Clocking in, length of the working day and how rich he was to become!
Ron explains the clocking in procedure, the working hours and how much he was paid initially.

Sports and Social Activities
Here Ron describes some of his experiences

Ron's Memories of the Gill Family
A well known local family. Many members of that family worked at F & P

'Marking Off' Table
Practical jokes beneath the table

“Fairbrother was a bit of a disciplinarian.  In fact it was more disciplined there than even being at school”

Bicycles and the Bristol Road

For the first two years Ron walked to work with his friend Don Williamson from Central.  After two years he’d saved enough cash to buy a bicycle from the famous Williams’ bicycle shop, which was adjacent to Fielding’s and next to the fish and chip shop.

“One of the problems we had there was that there were so many bicycles, including the Works’ Manager’s, that you had a job to find a space.  If you were late you’d had it!”

Along the Bristol Road there were many factories.  The big one was the Wagon Works, which employed approximately 1000 people.  There was also Moreland’s Match Factory.

“Of course we had Moreland’s where Sammy’s Angels worked.  And that was a sight when you came out on a lunchtime to see all the girls parading up and down, and certainly on a night time going home as well.  We were all on our bicycles riding four abreast along the Bristol and we were waved to and shouted at.”

Ron remembers that, on their first day, the apprentices were walked past the time office and passed through the Hydraulic Fitting Shop and that there “there was oil and smell everywhere!”

The apprentice training school was quite exciting with bench and machine work, as well as the infamous “block” test.

“The fingers and thumbs that were bruised – we knew the nurse very well!”

The standard week for an apprentice was 44 hours per week and Ron started on £1 1s 3d for the first six months.

Berkeley Mordecai, who was in Ron’s apprentice intake, entered the Drawing Office after leaving the CraftSchool.  Unfortunately, he was killed in a scooter accident at a crossroads near Dymock.  At his funeral, the other apprentices of the 1949 intake “carried his coffin through to the church.  It was quite a sad time”, Ron remembered.

After six months in the Craft School, Ron spent the next 12 months in the Light Machine Shop “under the scrutiny of a very famous foreman at Fielding’s Mr Reg Court”

Marking off involved marking an item with white lines in paint so that the machinist could see where to machine the item.  One of the marker offers favourite practical jokes was to get someone to talk at the marking off table whilst Ron snuck under the table and painted their heels with the white paint.

On one occasion a police sergeant came to Fielding’s to supervise a railways carriage that had to go out to cross the main road.  As a dare, Ron ducked under the table and painted the policeman’s shoes white!

After his National Service years Ron came Back to F & P and went to work in the Inspection Department.

Ron’s work in the Inspection Department involved making sure that the individual items had been made to the exact requirements of the drawing and then visits to site to make sure that presses had been erected correctly.  Sometimes Fielding’s fitters hadn’t been involved in the erection of the press and Ron had to check over the work of other fitters who worked for the company who’d bought the press. In the Inspection Department Ron earned an extra £1 a week pay.

In the role of inspector, Ron travelled the world, to Canada, America and Russia.  In Russia Ron got locked up in a prison cell!

“What happened was, they booked me into an hotel and when I arrived there I found it was a dreadful, terrible room – it was dirty, it was damp.”

So Ron found a different hotel and moved in. Everything was ok until 11.30 at night when there was a bang at the door and the armed police took Ron to prison.

“In those days under communism you weren’t allowed to move around without authority.  So I spent the night in the clink.”

Ron played for the rugby team at Fielding’s for about three years and played cricket for Fielding’s too.  He also remembers the annual sports’ days.

‘David Humphries’, known as ‘Bumper’ Humphries who played scrum half for Gloucester, decided he was going to enter the  Sports’ Day and he was going to run the half mile and I had to run the 440 yards. He got me down the sports ground and he trained me until my legs ached and my back ached and everything else ached.  But we both won our events!  And we used to train at least three nights a week at Fielding’s sports’ ground – never let up!”

It was at one of these sports’ days that Ron remembers meeting Margaret (whom he eventually married)!

Throughout the year Ron also remembers playing darts and table tennis at lunchtime in the canteen and the “cut throat” interdepartmental skittles tournament.

Moving up the table and redundancies

Ron experienced redundancies from both sides of the table.  In the early days, he remembers being made redundant by Leslie Spooner, only to be reemployed again ten minutes later!  The reason for this was that the company structure of Fielding’s was changing.  But Ron didn’t mind – he got his redundancy pay!

On the other hand, Ron’s senior position meant that he had to make others redundant.

“I had to make people redundant and that was the worst thing I ever did in my life.  Friends, colleagues I’d known for years, I had to tell them that they had been made redundant, dreadful job, didn’t want to do it but the managing director said I had to.”

Ron completed 50 years’ service at Fielding’s progressing from the marking off table to become Chief Inspector and then, after redundancies took place, finally to take over the running of the Fitting Shop in addition to his duties in the Inspection Department.

If you remember Ron or any of the people or places mentioned, then please share your memories by clicking on the words Add a comment about this page below.