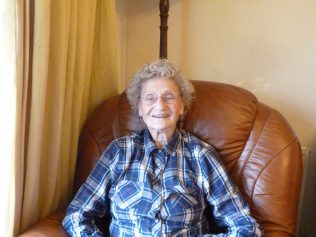 Daphne Collier 1
Daphne explains how she came to join Fielding and Platt in 1941 aged 17, her initial work in the Light "Top" Machine Shop, and how women had to dress

Daphne Collier 2
Daphne describes her work in the Boiler Yard, sweeping up and helping the old men who worked there bend the pipes over the braziers

Daphne Collier 3
Daphne is introduced to the practical jokes of the other workers at Fielding and Platt, after being sent off for a bucket of steam and a left-handed spanner

Daphne Collier 4
Daphne describes what the Pipe Shop was like during the war, how the presses were packed in wooden crates for transportation, and recalls the rail routes used to transport them

Daphne Collier 5
Daphne remembers the number of men working in The Boiler Yard, some who had been sent from Plymouth and Liverpool on war-work, and Mr Sparks, one of the senior men of the yard

Daphne Collier 6
Daphne recalls the hours of work, rates of pay, and the "happy" pay days when the Boiler Yard men would go to the pub for lunch

Daphne Collier 7
Daphne recalls an occasion on which she danced for the Boiler Yard men in the canteen, the dance halls of Gloucester during the war, and what happened if you stayed out too long and were late for work the next day

Daphne Collier joined Fielding and Platt in 1941, aged 17.  She had wanted to join her sister doing war work with the Wrens in the Scotland.  However when she went to the labour exchange in Gloucester she was told that she was too young, so was sent to do war work at Fielding and Platt.

The women of the “Top Shop”

Like the other women who were required to do war work there, Daphne was initially made to assist young male apprentices in the Light or “Top” Machine Shop.

I start work on the Monday – big bracer trousers, overalls, hair all tucked up, scarf all round your head so you won’t get in the machinery.”

However, after a fortnight, she was told she had to work nights, which she was unable to do, so was moved to work in the Boiler Yard.

A trombone in The Boiler Yard

As an assistant in the Boiler Yard, Daphne helped the men with many of the jobs. From sweeping up, to bending pipes over braziers, to packing presses into “great big crates” for transportation.

During the war, about 50 men would have worked in the Boiler Yard. Some were even sent from Plymouth and Liverpool as work at Fielding and Platt was classed as a reserved occupation.

At that time, Daphne recalls that Mr Sparks was one of the senior men in the Boiler Yard.

“He was a gentlemen, a church man, and he thought the world of me”

Mr Sparks was also the bandmaster of Gloucester Band and, on a Monday afternoon, would play his trombone in the Boiler Yard in preparation for the band rehearsals that evening. When he did, Daphne would get onto the granite slate used for bending the pipes and tap-dance along to what he played.

She also recalls an occasion on which she put on a show in the canteen for the Boiler Yard men. It was one of the few occasions on which they would use the canteen.

“The beautiful American music” at the dancehalls

Most nights Daphne would go out dancing at the Bath’s, The Mercer’s Hall, Princes Hall, or occasionally to Ashchurch, although no other Fielding employees went there.

“You name the dancehall and we were there, and that’s the truth and that was our life, and it was lovely.”

Many a time Daphne would be walking to work through the docks with her eyes closed because she’d got home and had to be back at work at 7.30.

She recalls that “you’d get in trouble with if you weren’t on time” but that “It didn’t matter ’cause they couldn’t sack you in those days, but you had to put up with the trouble, because if you got the wrong side of them the bosses could make your lives a misery”.

However, unfortunately, once war was over, Daphne, was made redundant, along with all the other men the company had taken on in the Boiler Yard during the war.

Click here to listen to how Daphne was crowned “Miss Fielding and Platt” and what the company did for Gloucester Carnival in 1942.

If you have any memories of Mr Sparks, Daphne, or the Boiler Yard in wartime please leave a comment at the bottom of this page, or why not visit our section about Wartime at the Works?