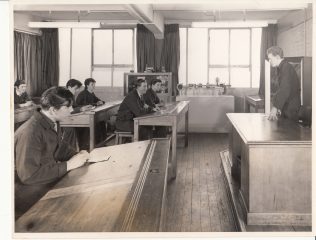 Alistair Adams 3
Alistair describes some typical days spent in the Apprentice School, what was taught there and night shifts

Alistair Adams 2
Alistair describes his first impressions of the works and the Fitting Shop, the size, smell, and noise of the machines

Alistair Adams 7
Alistair recalls the dangerous business of working in the Fitting Shops, accidents there, and Nurse Edwards in the First Aid room

Alistair started his apprenticeship aged 16 in 1963. He worked at Fieldings for 7 years, mainly in Hydraulic Fitting Shop Number 2, although his last 18 months there were spent in the Drawing Office as the Standards Engineering Draughtsman.

Alistair remembers his first day at The Works and being struck by the noise, smell, and size of the machinery. Some of the chucks on the Vertical Boring Machines were so large you could stand on them. “In the Heavy Machine shop”, he recalls, “some of the kit there was reputed to be the biggest south of Sheffield”.

The hours of work were 7.30am until 4.30pm and he remembers clocking in under the watchful eye of the Time Clerk and the financial penalties if you were late!

Instruction in the Apprentice School was rigorous and Alistair remembers that you “very quickly learnt the skills to actually produce the components that the company were building. You were working just as hard as the lads in the light machine shop and on production.”

In clip 4, Alistair remembers the breaks throughout the day and compares the different canteens at The Works.

At lunchtime, he remembers eating and having a game of darts in the Works’ Canteen, which was “very well used”.

There were three different canteen. One for the works, one for the managers, and one for the directors. On one occasion, Alistair recalls he had to go to the Directors’ Canteen to do some electrical maintenance: “I walked across the thick carpet in my ‘toe ’tectors’ and got a right telling off because of the greasy marks I left behind me”.

There was “a marked difference between the Directors’ Canteen and the Works’ Canteen.

“We had plastic chairs and tables, they had a nice long dining table with very comfortable chairs and waitress service; we had a hatchway where we used to have to collect our own food.”

Another department remembered by Alistair in clip 7 is the First Aid Department run by Nurse Edwards, whose son was an engineer.

Survival of the Fitters

In clips 5 and 6, Alistair describes the job of a Fitter and some memorable work offsite when he went away to install the presses at another company. He would do this four to five times a year.

“We’d build the machine in the works,” Alistair explained, “then strip it down for transport to site. This would include the columns, the two main castings, pumps, pipes, pneumatic servo, covers, everything.”

But Alistair didn’t just install new presses he would go and maintain and repair old ones, which, in the case of concrete slab presses could be very messy.

“There was water everywhere, wet concrete”.

If you remember the people, places, or machines in this photograph – or if the audio clips bring back memories – please share your memories by clicking on the words Add a comment about this page.

Click here to hear more about Pickford’s low-loaders and Fielding’s in the late 1960s.

Click here to see the photograph of the 1963 Apprentice Intake (of which Alistair was part).