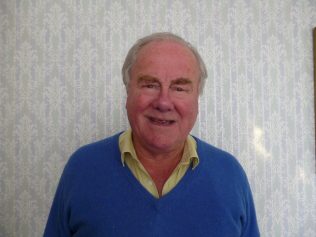 The early days
Travelling to work, clocking in, the sight & smells & apprenticeship details.

Starting work in the Drawing Office
Clarence talks about his duties, his colleagues and the pranks played

The 'lighter' side
A Sales Department dinner and some self entertainment

Duties
Clarence describes his duties as a Technical Sales Engineer

Travelling for the Company
Clarence recalls the countries he visited

Opinions of the Management
Brief details, culminating in Clarences decision to leave the company

The Social side
Parties at Christmas time

During the execution of his duties
Some amusing events

More travelling
A visit to China

Clarence was born in South Wales in 1931 and moved to Gloucester in 1942. He first attended Hatherley Road School before moving to the Junior Technical School. Whilst there, his Tutor suggested he take some of his drawings down to Fielding and Platt. This he did and showed them to Mr Tom Millington the Chief Draughtsman who was obviously impressed because he advised him to apply for an apprenticeship.

Clarence did, and was accepted and started work in 1946. Approximately 10 lads started at the same time but he only remembers one, John Ansley. The apprenticeship was completed in 1952.

Clarence then entered the Drawing Office where he worked on various sections before transferring to the Technical Sales Department. He left the Company in 1983.

He cycled to work; a two mile journey. The Tredworth Road  level  crossing was an obstacle to getting to work on time, as it was to many more employees. It was a 7.30 start time but  clocking in three minutes after that, meant a quarter of an hours pay being deducted. Clarence remembers the journey took him past the Wagon Works, the Sudbrook level crossing and the Hauliers Pub. He remembers the sights and sounds of the factory as he made his way to the Craft School There, as others before him, he was introduced to the dreaded block, the chiseling of which played havoc with his knuckles. He was not able to make any tools for use in the future.

Clarence recalls the canteen trolley at break times and what was available from them. Mrs Jones was the Canteen manageress.

After his apprenticeship was completed Clarence entered the Drawing Office. He first worked on the Spares Section with Harry Burlton before going to work for a section leader called Harold Thomas. He began to use a slide rule for calculations which were recorded in his personal ‘stress book’. Over the years the Chief Draughtsmen were Steve Davis, who tragically died as a result of attempting to rescue someone from the sea, followed by Ron Green and then Esmond Sergeant. Clarence remembers some of his colleagues, In particular Mr Jack Fielding who had served in the first world war and was prone to ‘dozing off’. Whilst in that relaxed position, someone would mimic the sound of a shell passing overhead, waking Jack very quickly! Another prank, for the same reason, was to roll a heavy steel disc along the gangway.

In 1960 Clarence responded to an advertisement on the Drawing Office notice board for a Technical Sales Engineer. He was interviewed by Garfield James, the Sales Manager and was accepted. For the first three years he worked alongside Len Drew. Others working in the Sales Department at that time were Morgan Walton, Ivan Perriam, Stan Metcraft and Martin Rich.

On one occasion, Clarence recalls, a Sales Dinner was held at the newly refurbished Greenway Hotel, owned by a friend of ‘Mr Jim’ Fielding. During the course of the evening Ted Bollen, the Sales Representative from the north of England,  performed  his party trick, which was to stick postage stamps onto the ceiling by means of a tossed coin. This was not appreciated by Garfield James, who attempted to remove them!

In the Sales Department,  Clarence’s duties involved examining incoming enquiries for the products of the Company for which he was responsible, namely extrusion presses and pumps. If a design was available, a price could be compiled and a quotation sent without delay. If not, the enquiry was sent to the relevant department where a design exercise would have to be carried out first. Other products were dealt with by different personnel, namely Bill Redding for Slab Presses and Scrap Balers and Morgan Walton for Stretching Machines.

He said “I visited  European countries, including Scandinavia in particular. I became the first Fielding and Platt employee to travel completely around the World. I went to Australia via Chicago, The Great Lakes, Montreal and Mexico City. After some months in Australia I returned via Tahiti, Fiji and  Thailand. where I met up with ’Tommy’ a young man who had worked with me in the Drawing Office some years before. The company had had a representative in Australia during the 1939/45 war, namely, Jock McKenzie”

However the chairman died and the newly appointed one changed direction. A management buyout eventually followed, with Michael Harrison as Managing Director. ‘Profit ’was replaced by ‘contribution’ and Clarence gives a detailed description on the audio clip of one example of this and its consequences, one being his decision to leave the company.

On the social side Clarence remembers Drawing Office Christmas parties at The Chequers Inn where there was always much singing and drinking. It was the custom there for  everyone’s tie to be cut off!! He also remembers taking his children to the Fielding’s Christmas parties  and also another amusing event where, after another party at The Canning Arms, six cars loads of happy occupants, drove back through the streets of Gloucester to the home of Bob Madeley where carols were sung in his garden!

During the course of his duties Clarence recalls a couple of amusing events. One was during a visit to London with his Managing Director, Mr David Rowles and the other during a visit to Sweden with Bob Madeley and Horace White. Please listen to them, they are quite funny.

In 1974 Clarence went to China on a six weeks visit, with Bob Madeley and John Averill. They were kept very busy, Clarence spent two days in hospital but as usual, there were a couple of amusing incidents. Please listen to the audio clip.

If you would like to make any comments about the people or events mentioned, then please click on the words Add a comment about this page.