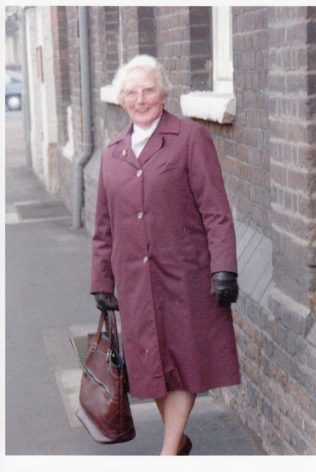 Iris Richards 5
Iris talks about her husband, Fred, who worked in the Boiler Yard and the foremen at there and in the Works

Iris Richards 6
Iris recounts how one of the directors, Mr Whittaker, "became a friend" to those who worked in the canteen

Iris started in 1947 as “a veg prep person”. However after a fortnight she was promoted by Miss Palmer to the canteen to serve in the directors’ “saloon”. She stayed to do “canteen work” at Fielding’s for 36 years.

As a canteen worker, Iris went round the Works and the Offices serving tea and refreshments. She also carried trays to the directors as well.

There was always lots do and time went quickly. Especially when men in the works used to play practical jokes on them. “They used to play lots of tricks on us!  They were real good fun all of them were”. The camaraderie of the company was such that “everybody was like a family”.

In clip 6, Iris recounts how one of the directors, Mr Whittaker, “became a friend” to those who worked in the canteen by introducing mops and a concreted floor to it.

On of the canteen workers jobs was scrubbing the floors of the canteen itself. However, they were often interrupted by calls for tea trays by the directors.

“If you were halfway scrubbing the floor and somebody called for a tray – they’d say “a tray for two!” and the manageress would call up “tray for two!” – you’d have to get up, wash your hands, pull your stockings up, get the tray ready, and dash it off, upstairs and downstairs it was, it really was a bit of a do!”

On hearing of this, one of the directors, Mr Whittaker, had the floor of the canteen resurfaced and bought mops for the canteen staff so they didn’t need to get down on their hands and knees to do this job.

Iris fondly recalls her 50th birthday celebrations at Fielding’s and how Lionel Longney and the Drawing Office made it very special for her.

“When I got through the door, there was all of them lined up singing ‘Happy Birthday’.  All my trolley was bunged up with paper, things, and balloons.  Oh, I didn’t know what to say!  Fiftieth birthday – that was the best birthday I ever had at work.  And then I had a great big box of chocolates off the Drawing Office.  And the Salesmen before we got there they were the same with flowers.  Beautiful!”

Iris would have continued working in this close-knit, friendly workplace after her 65th birthday but, reluctantly, she had to retire. Happily, however, she was taken back part-time. She also began working in the paper shop opposite Fielding’s until she retired fully aged 76.

If you remember Iris – working with her, or her bringing the trolley round, or serving in the canteen – please share your memories and stories by clicking on Add a comment about this page below.