You are here: HomenextPeoplenextPeople (General)nextPhilip John Cook was born in 1923 and commenced a 7 year Apprenticeship as a fitter in 1938 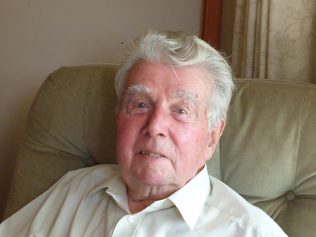 Health and safety, or, the absence of!
"Philip_Cook_2_Health_and_Safety".

Erecting Shell Presses 'at home and away'
"Philip_Cook_4_Memories_of_building_and_installing_shell_presses1". Genre: Other.

The Iron Foundry
"Philip_Cook_6_Memories_of_the_Iron_Foundry". Genre: Other.

Philip cycled to work from Churchdown during the wartime ‘blackout’ and worked a 48 hour week, all for 10/- !!

He later purchased a motorbike but obtaining petrol due to rationing ,was very difficult. On occasions he says,

“It was like riding through a farmyard, as I met up with pigs and  sheep on their way to the Cattle Market”

Philip had to attend Technical School which, at that time, was part of the City Library building.

His journeys took him past the De Lux Cinema in Northgate Street, which was eventually bombed.He well remembers working on the erection of  presses, manufactured to aid the war effort

Here Philip recalls the ‘clocking in’ procedure which necessitated  him having to rotate an arm around a ‘clock’ until it stopped  opposite his number (66) which he then punched.

Health and Safety was non existent. The deep pits had no safety rails around them. The heating was supplied by oil drums filled with coke. On one occasion, one of them was kicked over and  it fell into the pit, badly  burning  a crane slinger named Harry Johnson.

Philip recalls that there was no security at the factory during wartime. No damage was caused to the premises due to bombing. The nearest building affected was Montpellier in Spa road..The crypts of the demolished St Luke’s church were used as  air raid shelters.In later years a canteen was provided. Philip played table tennis there.

Philip describes the Shell Presses he worked on, who he worked with and experiences travelling to Birmingham and Bristol by train to install them. Some money saving methods are also described.

A Home Guard was formed, consisting mainly of office staff whilst fire watching duties were carried out mainly by shop floor workers. Some of the workforce were initially called into the services but soon sent back to do vital work as the war developed. Some ladies were employed in the Light Machine Shop and also as crane drivers. Philip names one of these as Mary.

An Iron Foundry was operative at the time. It had two levels. The foreman was Lance Pitt

Sporting activities for Philip were table tennis, which he played with George Holland, against teams like Gordon League and hockey, where he remembers a lady in the mixed team named Audrey Jones.

Philip describes some of the railway tracks around the Company, especially the one ‘splitting’ the site.

A foreman in the fitting shop prior to Jack Hobbs was a Mr Capener, surnames of more recent employees.

Finally Philip gives his impressions of the Company, describing how easy it was to join the Merchant Navy having mentioned the Fielding and Platt name to his interviewer.

We regret to announce that Philip has passed away.  His funeral was on 3rd September 2018.

If you knew Philip or any other persons or any of the topics given here, then please share your memories by clicking on the words Add a comment about this page below.