Introduced to F&P by Morgan Walton. 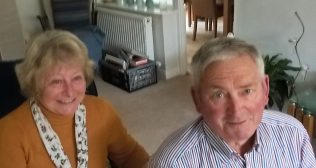 Pauline and Roger
Pauline at F&P in her own words.

Pauline started work as a junior in an Architects office, but wanted to progress her career. Morgan Walton, who worked at Fieldings, suggested to Pauline’s father that she apply for a job there.

The Estimating Department was her first port of call, where she worked for Les Wheeler. Other colleagues in the department were Stan Wood, who Pauline describes as a ‘Character’. Those of us who remember Stan will readily agree! Others in Estimating were, Ross Pamphilon, Eric Blackwell, Pete Norridge and Shirley Drinkwater.

About a year after starting in Estimating, Pauline moved on to the Sales Department, where she took dictation from the engineers and typed up the quotations on a manual typewriter. People in this department were Mark Hodges, Harry Field, Martin Rich (Pauline was his secretary when he was Field Sales Manager), Garfield James and Barry Evans. The other piece of equipment she had to adapt to was the Telex machine, where a strip of punched tape was produced as Pauline typed, then the finished tape was fed through the machine at high speed to send the quotations anywhere in the world.

Pauline used to walk past Colwell’s garage on the corner of Spa lights on her way to work and one day, Stuart Bick, a draughtsman, told her that a man, Roger Anderson, who worked at the garage, would like to meet her. She replied – maybe! They have now been married for 46 years!

Pauline finished her seven years at Fieldings in Sales, then left to have her family. Once her children were old enough, she worked initially at a playgroup, then in a shop and finally spent many years at St Peters High School,starting in Administration, but latterly in the Library. She retired from there four and a half years ago.