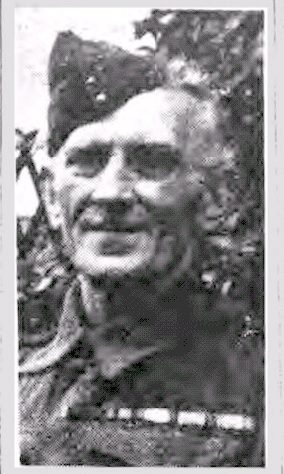 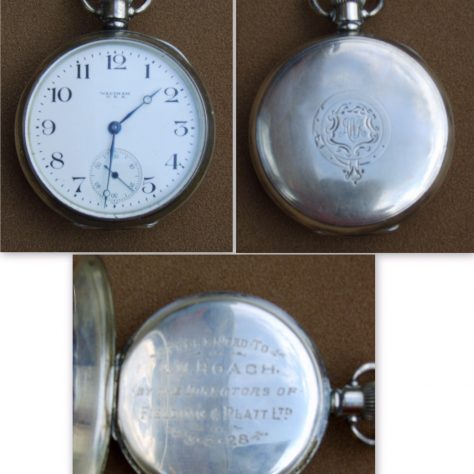 Silver watch presented to Alfred by Frank Fielding in 1928

Alfred William Roach was the son of William Roach – who was born in Rangeworthy, a rural part of Gloucestershire – where his father was a farmer.  He went on to become Storekeeper and Instructor of the Atlas Works Ambulance Class at Fielding and Platt.

Some time between 1871 and 1881, Alfred’s father, William, and three of his brothers moved to the City of Gloucester. All four brothers subsequently worked in the milling industry where William became a miller at Priday, Metford & Co.

Alfred’s birth was registered in the second quarter of 1881 when the family were living in “Gloster Road, Upton St Leonards near the Chequers Inn”.  In the 1891 census, when Alfred was aged 9, they lived at 115 Ryecroft Street in Tredworth.

On 27 December 1900, Alfred signed up for a short service of three years with the Royal Army Medical Corps (plus 9 years in the Reserves). He was 19 years and seven months old. His attestation papers state that his occupation was a “machinist”, although no employer’s name is given, that he belonged to the 2nd Volunteer Brigade (VB), Gloucester Regiment and his religion was Church of England. His next of kin were his father and brother, George Henry, both of 17 Widden Street.

He was described as 5ft 4½ inches tall, weighing 117lbs (8 stone 12 lbs), and having a chest measurement of 33½ inches (with a maximum expansion of 35 inches. He also had a fresh complexion, brown eyes and brown hair and with a small scar in the centre of his back. He was considered to be fit for the army and suitable for its Medical Corps. He joined up at Aldershot on 19 January 1901.

In the 1901 census, aged 19, he was a Private with the Royal Army Medical Corps based at the Stanhope & Wellington Lines in Aldershot, Hampshire.  He served “at home” from 27 December 1900 to 15 November 1901, during which time he was appointed as an Orderly, later 2nd Class Orderly.

He served with 19 Stationary Hospital (RAMC) in the Boer War and was declared medically fit for service by the medical officer at Gosport.He served in South Africa from 16 November 1901 to 12 February 1904.  On 27 December 1902, he was granted Good Conduct pay of 1d (one pence), despite having been given a punishment of “3 days CB”  (Confined to Barracks) for having been absent from duty between 3-4 pm on April 1902 whilst in Brindisi.  On 1 June 1903 he was appointed 1st Class Orderly.

He transferred to the Reserve on 13 February 1904 having served 3 years and 49 days.  His home address was Ivy House, Widden Street, Gloucester (the home of his parents).  His conduct was very good, he had been employed as a clerk and was a trained sick attendant.  He had earned one Good Conduct badge and the Queen’s South African Medal with the Cape Colony Clasp.

He married Alice Elizabeth Hayward at St Paul’s Church on 4 August 1906 and the 1911 census shows that he was living with her, their 3-year old son, George Alfred, and their 2-year-old daughter, Lilian Mabel, at 7 Dineley Steet. Another son, Henry William, was born in 1912.  He was working as a Gas Engine Storekeeper. This must have been with Fielding and Platt.

He was mobilised at Devonport on 6 August 1914 and posted to 8 Field Ambulance (RAMC) serving with the Expeditionary Force Overseas from 19 August 1914 until 16 April 1919, when he began 28 days’ leave.

During his service he was appointed Acting Corporal, later Acting Sergeant/Acting Lance Sergeant, and finally promoted to Temporary Sergeant, the rank he held when he was discharged to Class “Z” Army Reserve on Demobilization on 15 May 1919.  At this time his address was given as 83 Linden Road.

His disabilities were recorded as myalgia (attributable) to a degree of disability “15% ART (3) RW 18”.  He was awarded a weekly pension of 5s 6d (five shillings and sixpence) plus allowances for his three children of 3s 2d, effective from 16 May 1919.  His medal card states that he was awarded the Victory, British and 1914 Star with Clasp and Roses.  He was formally discharged on termination of his engagement on 31 March 1920 at which time his address was Belle Vue, 19 Goodyere Street, where he lived for the rest of his life.

The storekeeper who foiled a theft

Alfred returned to work as a storekeeper at Fielding and Platt at the Atlas Works.

On 3 April 1925, he appeared in court as a witness in a case of theft of a quantity of iron bearings, which the thief said had been taken from the scrap heap in Baker Street.  Alfred identified the metal and testified that it would not have been placed on the scrap heap by his employers.  The defendant was found guilty and sentenced to a fine of £1 or 7 days’ imprisonment.

On 3 February 1928, a dinner was held in connection with the Ambulance Class at the Spread Eagle Hotel, which was attended by its members and supporters.  Mr Frank Fielding presided and was supported by the other directors, the Class Lecturer, Secretary of the St John’s Ambulance Association, the Superintendant of the Wagon Works’ Ambulance Brigade, and others.

Certificates were given to successful examination candidates and a medallion was presented to Alfred.  The Honorary Secretary, Mr W J A Britcher, presented his report, speaking about the achievements of the Class.  Mr Britcher said that many members of Fielding’s Ambulance Class had later joined the Colours or gone on to do exceedingly good work in the VAD (Voluntary Ambulance Division).

Regarding accidents outside the Works, Mr Britcher remarked that several letters had been received by the company from members of the public who had appreciated and benefited from the members of the Ambulance Class’ care.

To read the report in The Citizen about the dinner click on the image of the newspaper report to the right.

Alfred, in particular, was toasted at the dinner in 1928.  In recognition of his work as its Instructor, Frank Fielding presented Alfred with a silver watch (below), in appreciation of his self-sacrificing and long-standing service in the interests of the Works’ Ambulance Department.

The watch was manufactured by the American Waltham Watch Company and the case was made by the Dennison Watch Case Company of Birmingham.  Alfred’s initials are engraved on the back. The back cover opens to reveal the inscription “Presented to A W Roach by the directors of Fielding & Platt Ltd Feb 3rd 1928”.

Alfred was also a member of the St John’s Ambulance Brigade. For many years, he organised weekly whist drives (many reported in The Citizen) to raise funds for the St John’s Nursing Division, which helped to maintain a cot at the Children’s Hospital and benefited other deserving causes.  Some of the whist drives were followed by dancing to George Roach and his band, who must have been either his brother or his son.

In April 1947, the Fielding and Platt annual dinner was held at Urch’s Café in Southgate Street, and the Ambulance Class was again toasted, with reference to the good work done by them over many years.  The Class was thanked for contributing £723 5s 8d to the Children’s Hospital as well as £10 of much needed equipment.

Women members and some wives of members were thanked for spring cleaning the wards and some of the men had done quite a lot of painting and decorating.  It was also announced that Alfred had been invested with the insignia of Officer of the Order of St John of Jerusalem, so it appears that Alfred was still working for the company at that time.

A visit by the Duchess of Gloucester, 1948

On July 2 1948, the “Gloucester Day by Day” feature in The Citizen, reported the visit of the Duchess of Gloucester to the Gloucester Royal Infirmary on 1 July.  Alfred had been in the infirmary for seven weeks with partial paralysis and the Duchess had asked to be introduced to him because of his 48 years’ service with St John’s Ambulance.  She had several minutes talk with him, during which she remarked that he could not be very comfortable under the hood which held his bedclothes up.  He reassured her that “as a matter of fact, I am quite comfortable”.

Sadly, Alfred died on 4 October that year, aged 67.  His obituary refers to his army service and records that he had worked for Fielding and Platt for 45 years, becoming Chief Store Keeper and the company’s Home Guard.

Alfred’s funeral was reported in The Citizen on 15 October 1948.  It took place at Ryecroft Methodist Church, Gloucester, where he had been a member of the choir for 22 years.  The coffin bearers were members of the Atlas Works’ Ambulance Class and the service was attended by Jim Fielding, representatives from the British Legion and the old Contemptibles, amongst others.

On 8 October 1948, the Gloucester Day by Day column included a tribute to Alfred from the Weapons Training Officer of the 5th Battalion Gloucester Home Guard. The tribute read:

As medical orderly on HQ Staff, Sgt Roach used to attend all range practices at Sneedhams Green range and he undoubtedly spent more Sundays there than anyone else in the Battalion.  On numerous occasions he walked from his home in Goodyere Street to the range on Sunday Mornings and then was on duty there for the rest of the day.  His enthusiasm, keen sense of duty and reliability were outstanding qualities in a man of his age.  Above all I remember his quiet efficiency on the occasions – happily few – when he was called upon to render medical aid.  He was a fine soldier and a fine man.  I am proud to have known him and to pay this tribute to his memory.  When I saw him last week he was, although very ill, looking forward to the publication of the battalion history.  ‘I shall be proud to have a copy’ he said.”

It seems that Alfred William Roach was a long-serving, trusted, and valued employee, a reliable soldier, and an enthusiastic and efficient medical orderly, who used his skills not only to help those who needed it but to train others to do the same work.

Alfred is remembered by Stan Nash who recalls visiting him when he severed a tendon on a circular saw.

If you remember Alfred please share your memories by clicking on the words Add a comment about this page.

Click on the hyperlink to learn more of the Roach family.