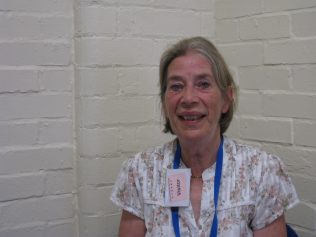 Working for the Sales Manager
"JudithC_1".

Moving to the Directors' Corridor
"JudithC_2".

Insights into working with the Directors
"JudithC_3".

Judith Chamberlayne talks to Ollie Taylor about her work as a Private Secretary and provides us with a fascinating insight into life on the “Directors’ corridor”.

In 1962, Judith joined the company as secretary to Garfield James, the Sales Manager.  She explains a little about the hierarchy of the department, the amount of paperwork that was generated and the state of the offices, apparently the décor left a lot to be desired!  One of the major jobs Judith remembers working on was CEGEDUR.  They were a good team and everyone helped out when needed.  There were four Sales Engineers in the department at the time, Ivan Perriam, Morgan Walton, Clarence Hack and Martin Rich.

Most of the time Judith was office based, however she did get the opportunity to attend the International Engineering Exhibition at Earls Court in London.  This was a very exciting event for her, although she said she was primarily there to make the tea!  In the evenings they all went out to some amazing places.

Judith was only in the Sales Department for about a year before being asked to move up to the Directors’ corridor and work for Mr. Whitaker, the General Manager.  Unfortunately things were not going well for the company at the time and he was subsequently fired.

The Board Room was “hallowed ground” for most people but Judith had to go in there regularly.  Board Meetings were held about once a month and taking in the tea was quite a feat as she had to open the door whilst balancing a heavy tray of drinks and not spill a drop.  Judith does remember there being an oil painting of Mr Platt in the room and wonders what happened to it when the company closed.  Does anyone know?

Judith recalls the various company cars used by the directors.  These vehicles were quite a status symbol and ranged from Jaguar through to Rolls-Royce and Ford GT40.  The company also employed a chauffeur for Mr Fielding.

The Group Personnel Director, Mark Phillips, began visiting Fielding & Platt more frequently and Judith was asked to work for him when Mr Whittaker left.  She spent 1 or 2 days a week with Mr Phillips and the remainder of her time working for Ron Green, Chief Engineer, and Chris Manners.

Judith tells us about the daily routines, getting post to and from the Post Room, and a special occasion when the Workers’ Playtime concert came to Fielding & Platt.  Noelle Gordon was involved in this event and the directors took her out to lunch.  Unfortunately Judith did not have the chance to attend the concert herself as she was too busy.

The work Judith did for Mr Phillips was much more varied, involving business activities and a huge amount of personal work too. He travelled to other group companies quite a lot and Judith also had to work in Worcester sometimes.  She remembers that the Directors’ secretaries had special headed notepaper for use when corresponding with other directors or VIPs.

One of the special events that Judith had to organise for Mr Phillips was the Hunt Ball, this was held at the Pump Room in Cheltenham.  She was present at the event, along with another secretary, as they were in charge of selling raffle tickets.

Mark Phillips had been in the Army and therefore was sometimes known as Captain or Major as well as Mister – Major being the unsubstantiated rank he had when he left the services.  Depending on the work he was doing at the time, Judith would have to use the appropriate title in his correspondence.

Judith’s hours were flexible and there were times when she was so busy she had to take her typewriter (a Hermes semi-electric machine) home to complete her work.  This meant struggling down the stairs with the heavy machine, quite a triumph for a young lady in high heeled shoes.

Mrs Jones, the Canteen Manageress, was another member of staff who always “went the extra mile”.  Mr Phillips liked shooting and on occasion he would bring in a Grouse for Mrs Jones to pluck and dress, so that he could take the bird home for his wife to cook.

Later on there was another take-over of the company, this time by Redman Heenan International.  Jim Fielding’s secretary was unwell so Judith and a colleague had to take it in turns to look after him when he was on site, as well as working for their own bosses. This went on for some months and when Mr Phillips moved to Worcester, Judith was asked to work for Mr. Fielding full time, as his own secretary had not returned to work.  However Judith did not accept this post as she was about to get married and did not think she would be able to devote sufficient time to a high-powered job whilst setting up home with her husband.

In the last clip, Judith gives us an insight into her secretarial training, going to college and night school to improve her shorthand (140 wpm), and about some of the machinery used in an office in those days.

When recalling what the area surrounding the factory was like, Judith said she remembered the local tobacconist quite well.  She used to buy Mr Phillips’ favourite cigars with her own money and keep a supply in her office.  Mr Phillips would reimburse her as and when he smoked one.

Judith found her jobs after Fielding & Platt were not so fulfilling but eventually she gave up secretarial work altogether and started a family.

If you remember the people, places and events mention here – or the audio clips bring back memories – please share your recollections by clicking on the words Add a comment about this page below.