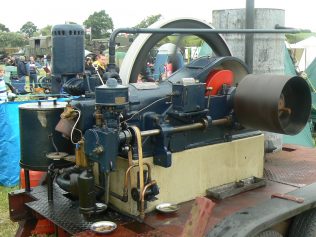 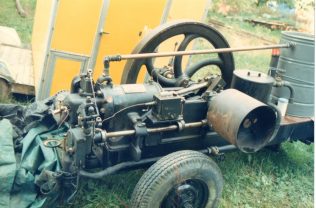 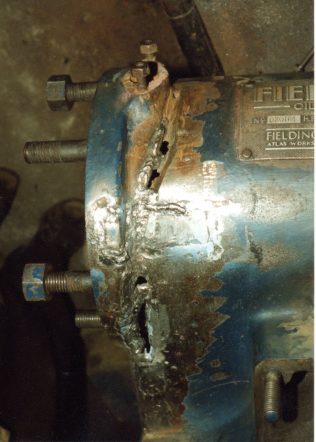 In 1990 the late Ray Swan and myself bought the engine for restoration which was carried out in the winter of 1990.

The first part of the restoration was to build a steel frame which would be rigid enough to keep the engine and outrigger bearing in line so as to maintain true running of the crankshaft.

The next job was the dismantling of the engine which revealed that mechanically it was in reasonable condition.

Over the next 6 months the engine was rebuilt onto the framework during which time the main bearings were scrapped in and the crankshaft aligned.

When we were preparing the engine for painting we found a weld repair to the water jacket and assumed that the engine had suffered frost damage.

When the engine was first started after restoration the weld opened up and water ran out like a fountain.

It was at this point that we realised that frost had not been the cause of the crack but it was a bad casting. Where the crack had occurred the thickness of the cast iron was app1/4” but on the opposite side it was app1/2” thick and we assumed that when the casting was done that the core must have moved.

When we were welding the water jacket we found that the cast iron contained a large amount of impurities which made the repair very difficult.

Once this was done the engine was rebuilt and finally ran very well and was first put on show in June 1991.