Memories of the "beautiful craft of pattern-making" 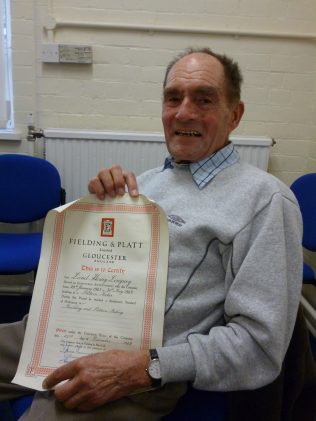 Lionel Longney 3
Lionel takes us through the process of making a pattern, from the machinery used to saw the wood to how patterns were fixed together and finished with colourful varnishes

Lionel Longney 5
Lionel remembers the Pattern Shop's foreman, Bruce Vallender, what he was like and how he came to his rescue when there was a problem at the foundry...

Lionel Longney 6
Lionel gives a detailed description of how the patterns would be used in the foundry to make a casting, from the selection of a mould through to excavation and casting itself

Lionel Longney
Lionel informs us of the different types of wood that patterns could be made from - from Sitka Spruce, to Yellow Pine and Mahogany - and why and explains where the patterns were stored and what happened to them when Fielidng's closed... 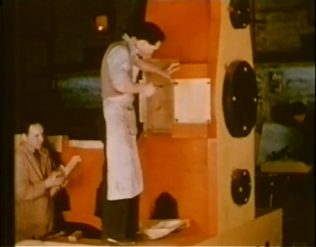 zoom
Lionel (centre) at work in the Pattern Shop screwing together a large pattern. As he describes in clip 3, the patterns for rough castings were always painted in a brilliant scarlet red, as can be seen here. To his left, another pattern-maker sands a part of a pattern, and to Lionel's right, in the background, a pattern-maker uses a planer on a bench
Gloucestershire Archives

Lionel served his apprenticeship as a Pattern Maker at Fielding’s from 29 January 1945 to 30 May 1949.  Here he describes what the Pattern Making Shop was like, the people in it, and the process of making a pattern, from receiving the wood to the pattern being used in the Foundry.

As soon as you went into the Pattern Making Shop there was the beautiful smell of pine.  Patterns were generally made in Yellow Pine which was “a beautiful wood to work with”.  There was also quite a good selection of machines in those days – circular saws, band saws, and planers – with which the Pattern Makers worked.

“First of all there as soon as you went into the Pattern Shop there’s that beautiful smell of pine and the varnish they used to varnish the patterns with, plenty of dust, oh and the glue – that brings back memories!”

Lionel remembers being “privileged” to be given a piece of Yellow Pine to make his first pattern with.

The Process of Pattern Making

The timber was brought to the Pattern Making Shop in bulk from barges on the Gloucester to Sharpness canal.  From there it was put onto a low loader and then carried into the Pattern Shop by the Pattern Makers.  The long planks were 12 inches wide and three inches thick so very heavy.

During the Second World War, Sitka Spruce rather than Yellow Pine was imported for Pattern Making.  Sitka Spruce was “hard, resinous stuff” compared to the Yellow Pine that was “a beautiful to work with” and had less resin in it.

The wood used for the patterns was first sawn to requirements from the bulks of timber.

Pattern makers would then work to a blueprint to make the pattern. Bruce Vallender, the foreman, would give some indication of how he wanted it made and “then you just got on with it”.

The patterns were built up with planks and framework and screwed and glued together.  They were usually jointed because some of the patterns were colossal, as big as a single decker bus!

“Some of the patterns were colossal – as big as a single decker bus!”

The patterns were then planed and sandpapered if necessary, and then given a coat of varnish.

Patterns were made for parts for balers, riveters, and all sorts of presses.  Today Fabrication has taken the place of casting and therefore pattern-making.

How the Patterns were used in the foundry

The Pattern-makers themselves oversaw the transportation of the patterns to the foundry.  In the case of the larger patterns, the double doors in Pattern Shop would be opened and then the pattern would be lifted from a crane onto a low loader.

In the foundry, the foundrymen would select the mould they were going to use for the pattern, depending on its size.

It was a shame to burn yellow pine because it is such a beautiful timber.  Of course they had other timbers there they’d make packing cases out of where the quality of the wood was far less than yellow pine.  Yellow pine is the king of all woods used for pattern making.  Other than Mahogany of course, where you wanted a long lasting pattern.”

Lionel once remembered making a connecting rod in Mahogany.  The big end diameter was about 2ft.

Lionel remembers Bruce Vallender who was the Pattern Shop’s foreman at the time Lionel was there.  He was, Lionel recalls, a “hard taskmaster” and a “stickler” but “he was very good to him”.

On one occasion, Lionel was called to the foundry because there was something wrong with one of the core castings.  Bruce Vallender came to Lionel’s rescue saying “if the idiots in the foundry don’t know what they’re doing that’s their fault!”

It transpired that the foundrymen had put it in the wrong way round.

Lionel also recalls an amusing occasion on which Charlie Weston (who worked on the saw) and Ben Cooper (who was the checker) were carrying some timber into the Pattern Shop.  Charlie was “a short fellow” and when Ben said “Watch your arse on the pavement when you step off Charlie!”, Charlie chucked the plank on the floor and poor old Ben almost broke his shoulder!

Click on the hyperlink to listen to further memories of Lionel’s apprenticeship in the Craft School and how he came to be an apprentice.

If you remember the Pattern-making Shop, Lionel, or any of the pattern-makers he recalls please share your memories of them by clicking on the words Add a comment about this page below.