Bob Madeley
Bob remembers the spring eye-rolling machine, which was used to roll the eyes of leaf springs for tanks. An order was placed with the Company for this machine during the war years. 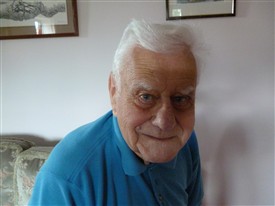 Bob remembers an order being placed for a Spring Eye Rolling machine, which was used for rolling the eye on leaf springs for tanks. It was ordered from Fielding and Platt during the war years.

He worked with Bertie Gowen at the time and Bob talks about all the parts of the machine, some of the problems they had with it and how it worked altogether.  He remembers how he overcame some of the problems they had with the machine, and how Bertie Gowen was so impressed with Bob, that he referred him to the Technical Director, Reggie Rowles who came and congratulated him personally for his idea.

“If there was anyone I had to thank for any small success, I’ve got Reggie Rowles to thank for it, as I say, he was very good to me.”