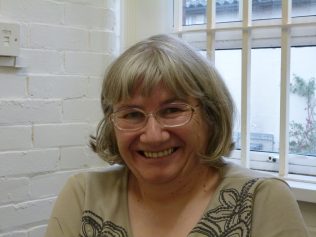 Finding her Office
"Anne_Martin_Works_1_Location_and_Layout_of_the_Offices_and_their_atmosphere". Genre: Other.

The Stationary and Filing Offices
"Anne_Martin_Works_4_Des_of_Filing_and_Stationary_Rooms1". Genre: Other.

Ann reached her office by walking along a series of winding passages, a bit ‘spooky’ she found.  Later she was joined by two other typists from the Production Control Department.  One of these was Margaret Forran, a very lively young lady!  Ann found that socializing within the  Company was very satisfying.  She sold poppies around the works and participated in the Christmas Party preparations.

Ann describes  a working day.  One of her duties was operating the Telex machine, which she describes.  Another duty was using the Copying machine where incoming correspondence was copied on to a number of  different coloured sheets.  The colour indicated which department  was to receive it.  She typed letter and quotations but in quiet times typed her personal letters and even read a book positioned in an open drawer!

The office she worked in was painted pale blue and was sited adjacent to a disused railway track.  Her typewriter noise seemed excessive in such a small office and changing the tape proved a very messy operation.  She got on very well with the other three occupants of the office.  Just as well in such a confined space.

If you knew Ann or worked in any of the offices she mentioned, then please add your memories by clicking on the words Add a comment about this page below.

Click on the hyperlink to listen to more of Ann’s memories.