Memories of the clothing, rationing, air-raids, and more 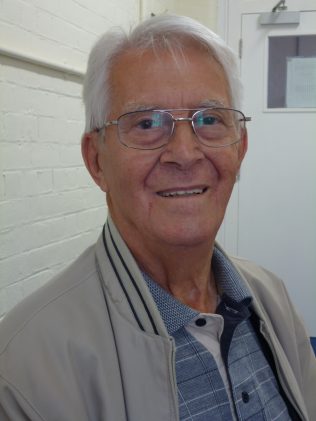 Walter Organ 2
Walter remembers being an errand boy in the war, going to collect the sugar ration for the factory, salimoniac, and monkey nuts

Walter Organ (known as “Wally”) began his apprenticeship in 1940. Here, he recalls the “hectic” years at Fielding and Platt.

In wartime, the company provided make-shift air-raid shelters for their in St Luke’s vaults, previously used by St Luke’s Church. Walter remembers how the coffins were removed to make room for the benches that employees sat on during the air-raids.

Walter remembers that about 200 of the company’s 900 strong wartime workforce crammed into the Vaults. They “smelled all musty and horrible” he recalled.

But Jim Fielding, the owner and at one time commanding officer of the Fielding and Platt Homeguard, would remain outside with a shotgun.

Jim Fielding stood outside with a shotgun, what he was going to do I don’t know!

Perhaps he felt it was his duty to protect his employees.

As an apprentice, Walter also acted as an errand boy for the company during the war. He remembers going to J B Williams, the wholesalers on Westgate Street, to collect the company’s sugar ration so that tea could be made in a large urn for the factory’s employees.

He also remembers being sent for salimoniac, so that cylinders could be tested and repaired, nipping over the wall to get monkey nuts from The Docks, and how apprentices would impress their sweethearts in the Machine Shops by baking potatoes from Nelson Gardiner’s, the greengrocers, in the gas burners.

From Field Marshall to Fielding

In clip 4, Walter describes an occasion on which he and another apprentice, Frank Poole, tried to enlist in 1942 and a letter from Field Marshall Montgomery to Fielding and Platt’s employees.

The pair were prevented from joining up because workers in manufacturing were needed for the war effort. Not to mention that they needed special permission to break the terms of their apprenticeship.

The letter from Field Marshall Montgomery, that Walter describes, shows just how necessary workers like him were to the war effort.