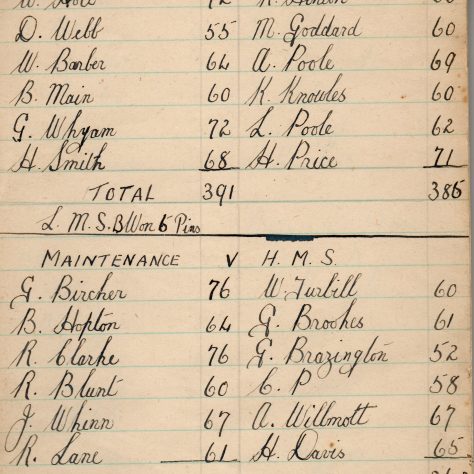 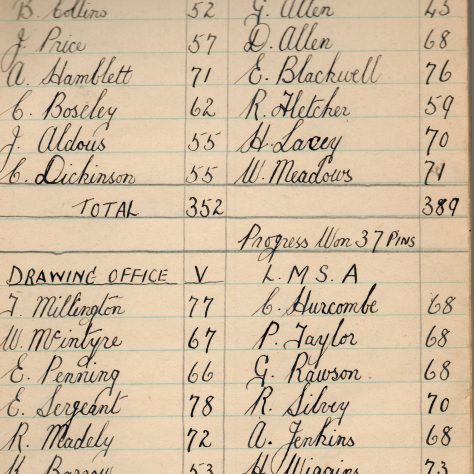 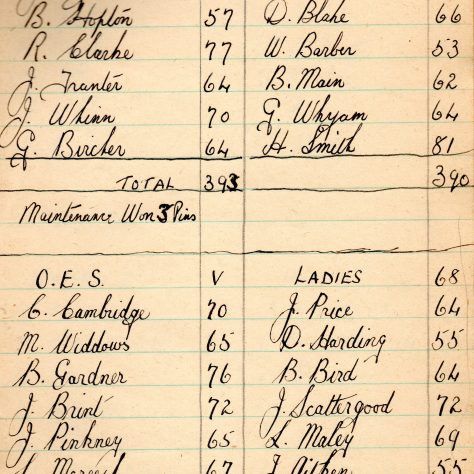 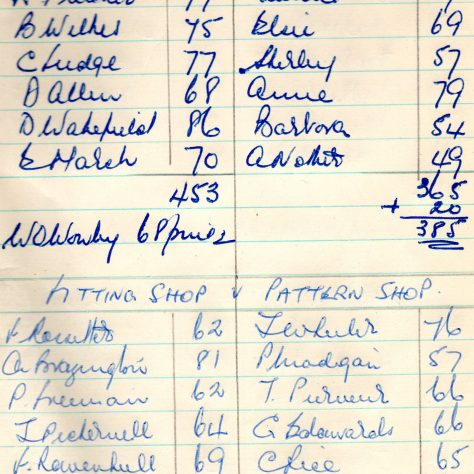 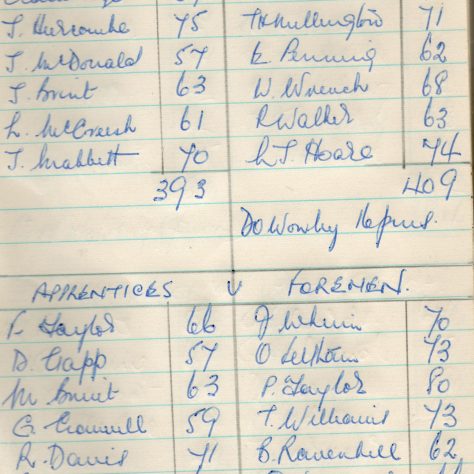 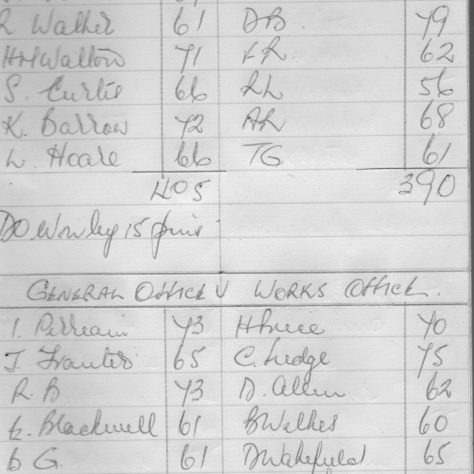 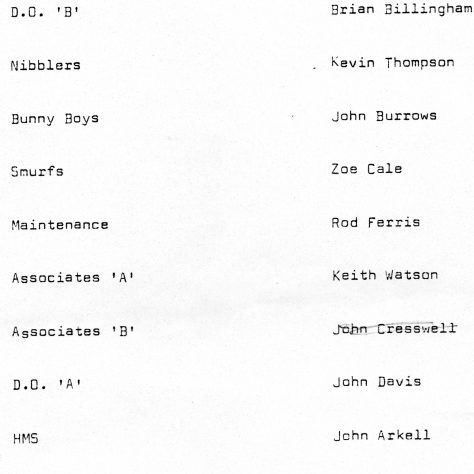 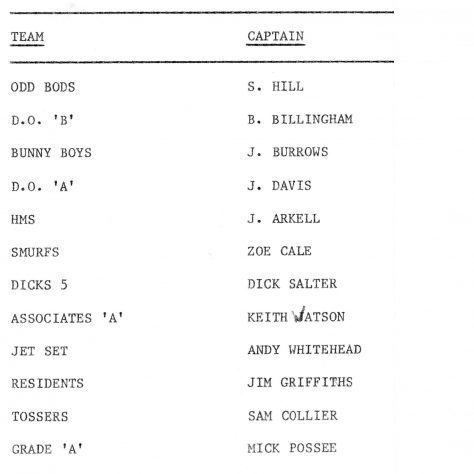 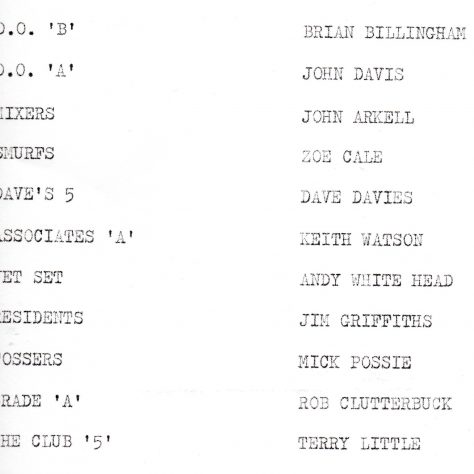 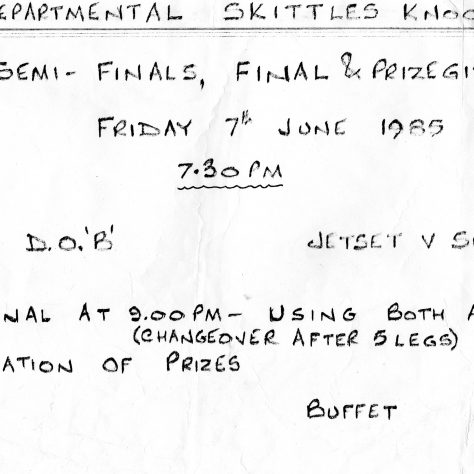 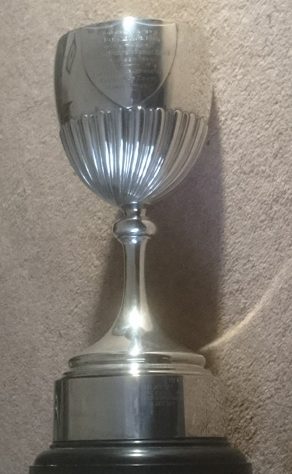 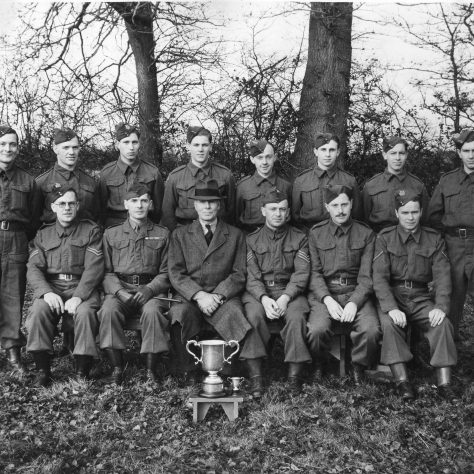 Initially, skittles were played at India House in Barton Street. In about 1960 the Sports Club was built on the company Sports Field in Sudmeadow Road, Hempsted. This Club House replaced the two railway carriages which were used as changing quarters for rugby and football. Inter-departmental (I-D) skittle matches were played here until 1985. The Club remained in F & P hands until 1996 when it became the Meadow Park Social Club. It finally closed down in 1999.

The I-D Skittles Section of the Sports and Social Club was always very popular. In the 1949/1950 season there were 10 departments competing. They were:- Light Machine Shop (LMS ‘A’), (LMS ‘B’), Hydro 2, Maintenance, Heavy Machine Shop (HMS), Oil Engine Shop (OES), Ladies, Tool Room, Drawing Office (DO) & Progress Department. Some pages from that season are shown:-

Some pages from that season are shown:-

From 1960, the two very long concrete alleys in the new Club House were in use, very daunting to some but enabling four games to be played each Friday evening. Gordon Allen continued to be the Secretary right up to 1977, a span of 28 years! John Migchielsen took over until 1979, followed by John Burrows & John Davis until 1983, finally John Davis until 1985. The charge per player, per game, was 30p in 1977 and 60p in 1982.

There are no records of individual team members but the three attached sheets for the 1981/82, 1982/83 & 1983/84 seasons give details of teams competing and team captains. It will be noted that a number of ‘Associate’ teams were included due to the decline in departmental teams.

I-D skittles finally came to an end in 1985 with the playing of the Knock-Out Competition, which was won by DO ‘B’.  A cup was awarded.

There is no surviving record of the winners of the I-D League Competition for the 1984/85 season, BUT A CUP WAS AWARDED, but never returned!!!  The whereabouts of this cup is unknown. The F & P Heritage Group would dearly like to exhibit it as part of a display for the 150th anniversary of the founding of the company, planned for September of 2016. If you know the whereabouts or can help in locating this cup, please contact this website. It is believed it was once used for competitions between the platoons of the F & P Home Guard during wartime and shown on the photograph.

If you played I-D skittles, had a relation who did or can relate to any of the people shown on the attached team sheets from long ago, or know anything about the cup, then please share your information by clicking on the words Add a comment about this page.