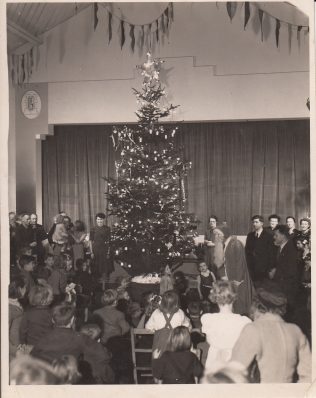 In 1942, a likeminded group of employees decided to put on a Christmas tea party for their colleagues’ children. They were keen that the magic of Christmas should remain for their children in spite of wartime austerity.

The parties were held in the Works’ canteen on a Saturday afternoon and hundreds of children would attend. The canteen would be lit by Christmas lights rigged up by Ron Curtis from the Electrical Department.

The parties became a company tradition and were documented by the company’s photographers. 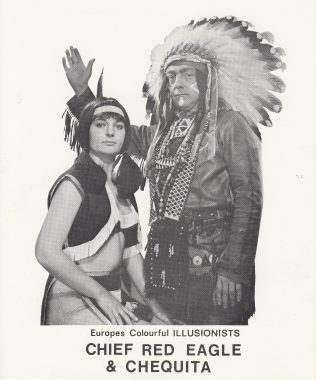 Performers in the 1960s. Their real names were Mr and Mrs Colin Gosling!

The afternoon would begin with entertainment, such as a local magician. Pippa Edwards, whose father Jack Fielding worked in the Drawing Office, remembers “the conjuring tricks were just amazing!”.

After the entertainment, Laurel and Hardy or Disney cartoons such as Snow White and the Seven Dwarves would be shown.

The films would be projected from a box above the canteen itself.

Brian Mince, the company’s photographer from 1952-1974, remembers “going up the rickety old stairs into the projection box to show the Tom and Jerry cartoons we used to hire. They went down a treat!”

Then there would be a Punch and Judy show before the tea. 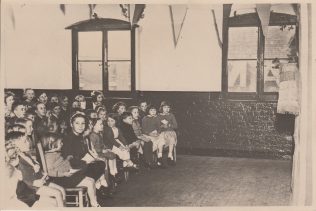 “He’s behind you!” – children enjoy the Punch and Judy show

Geoff Hobbs, whose father, Jack, used to organise the parties, remembers the food.

“In those days [1940s] it was largely fish-paste sandwiches or potted meat because food was on rations” he recalled. “You couldn’t get the real thing. But somehow they managed to come up with jelly and ice cream!” 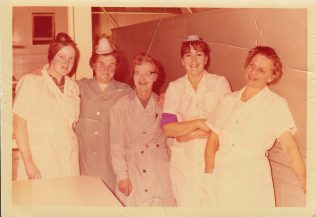 Pippa Edwards also remembers the “wonderful display of food” which was “eye-opening, especially during the wartime”.

Members of the canteen staff (pictured here in festive mood) would help make and serve the food at the Christmas parties. Photographed here (from left to right) are: Marion Iles, Lil’ Webb, Rose Sharpe, ? , and Mrs Jones.

Geoff’s earliest recollection of the children’s parties goes back to when he began seeing “strange wooden shapes appearing on the kitchen table”. These, he explains, were wooden toy animals made by Fielding and Platt’s workers in their spare time and lunchtimes that were brought home and painted by his father.

Walter Organ, who started work at Fielding’s in 1940, remembers making “little cars and monkeys from the wooden off-cuts from the Pattern Shop”. They were made so that every child could have a toy for Christmas. 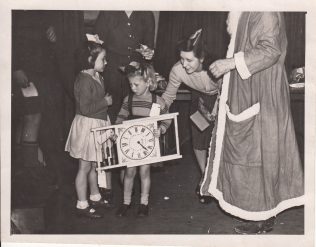 Santa handing out a wooden clock

In later years, toys would be bought rather than made. Brian Mince, who was chairman of the Christmas Party Organising Committee in the 1960s recalls the group would run a weekly raffle throughout the year to finance the parties. Brian would then go to Sampson Supplies, at the Spa Road traffic lights, to buy the toys.

“For the babies we used to get cuddly teddy bears, but for the older ones they could anything, box games, mechanical toys. We didn’t skimp, they were all good quality!”

A couple of months before the party every employee would submit the names of their children who would attend and the year they were born. “We always used to laugh” remembered Brian “because there were always the most kids born in 1966”.

Each one would get an individual present. The children attending the parties were usually aged between five and eleven but if an employee had a baby, the baby would get a present too! 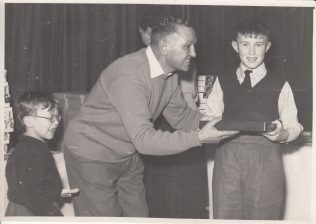 Derek Moseley, who attended the parties in the early 1950s remembers that “everything would be jollied along by ‘Uncle Jim’, who I later found out was Jim Haines”. Jim was “the life and soul of the party at Fieldings” and helped Jack Hobbs put them on. “It was part of the ‘Fielding Family’ ethos”, Jack’s son Geoff remembered, “they did them with a great willingness of heart”.

The parties would build up to the magical moment when Santa himself would arrive! “We would all line up in our age groups and go up to collect our presents” recalled Derek.

The organisers would take it in turns each year to dress as Santa. Brian Mince remembered there was no shortage of volunteers for the job. After all, “it was one of the highlights of the year”.

Bill Boon from the Light Machine Shop was an especially good Santa. “He made a wonderful Father Christmas,” Brian recalled, “he had a wonderful rapport with the kids!” 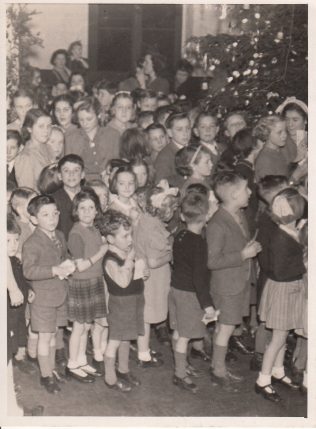 Children line up in age groups to receive presents

And was this simple entertainment enjoyed by the children? You bet! “I thought it was magic!” Derek smiled.

This is echoed by Pippa Edwards who remembers there being “some music, somebody playing a piano. Very simple things, you wouldn’t think anything of it these days, but then it was amazing. There was no television. It was a very good occasion indeed.”

Did you attend the parties? If you did what do you remember? Please leave a comment at the bottom of the page. 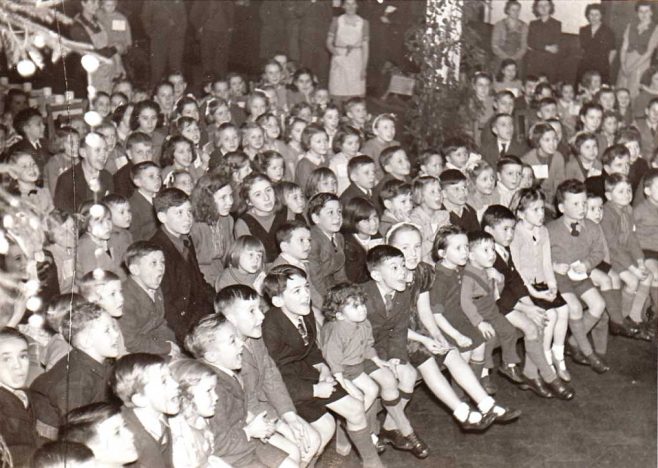