You are here: HomenextPeoplenextThe Fielding FamilynextThe value of Fielding & Platt in 1909 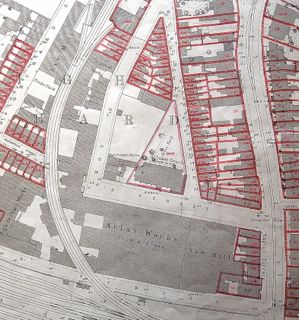 In 1909, in the so-called “People’s Budget”, the Chancellor of the Exchequer, David Lloyd George, introduced a proposal to raise a new form of tax on increases in the value of land (regardless of whether there were buildings on it or not) to be paid on each occasion that the land changed hands by sale or lease.

The Budget was initally rejected by the House of Lords, who could see that they would be the main taxpayers as owners of large amounts of property, but it was passed the following year in the Finance Act 1909/10.

Before the tax could be assessed, the base value from which the increase could be measured had to be established.  An army of surveyors were required to value property as at 30 April 1909. There was much argument about the proper valuation of agricultural property, and the survey was interrupted by the First World War. After that, most of the clauses of the tax were repealed, except for those dealing with mineral rights.

The valuations for Gloucester are contained within nine big red books, with entries running across two sides of the book, set out in landscape fashion with many columns with printed headings. Valuations were broken down into several sub-categories. Owners’ blocks of property were then numbered and marked on a map with the hereditament number which identified the property in the valuation books.

The entries concerned with Fielding & Platt in Gloucester are found in the book in Gloucestershire Archives reference GA/D2428/1/35/8. They are surprising in the information they give about the firm. Six separate properties located in St Luke’s Street were numbered:

The Atlas Works was listed as number 13 St Luke’s Street. In addition, there were the Riverside sawmills in Llanthony Road, and a yard and buildings in Baker Street.

Ownership of the workshops

The warehouse and more workshops were owned by the trustee of A J B Fox, who lived at 22 St Georges Avenue, Bridlington. This looks like a business which had been divided between two partners from Bridlington, one or both of whom had recently died; the entry is not quite clear on the position of A J B Fox.

The sawmills and premises were owned by the Great Western Railway, which incidentally owned a substantial amount of property in Gloucester and the county generally.

The Atlas Works and Alfred Roach

Rather unexpectedly, the Atlas Works were not occupied by Fielding & Platt but by Alfred William Roach – the firm’s storekeeper and ambulance class instructor.

The various industrial premises occupied by the firm, on just under 1 ½ acres, were valued at £28,080.  For the purposes of raising money for the care of the poor, the rateable value of the industrial premises was £904, and the gross value £1076. This illustrates brilliantly the lag between rates and capital values in 1909, as indeed in 2009.

John’s house was worth more than James’s, but James’s house and grounds together were the more valuable, reflecting the greater value put on land (1 ½ acres). Their houses were worth approximately eight times more than the houses in the immediate vicinity of the Atlas Works.

“Fieldings Ltd.” may have been members of the same family but were financiers in St Michael’s Square.

The data is set out in a spreadsheet and can also be seen on the Lloyd George land values website www.glos1909survey.org.uk.

Comparisons with Listers of Dursley

The material for Dursley has not yet been transcribed (a volunteer would be welcomed and a contact is provided on the website) and so Fielding & Platt cannot yet be compared with Listers, the other manufacturing business linked with Fielding & Platt in the interesting afternoon conference at Gloucestershire Waterways Museum on Saturday 23 March 2013.